Today is a special day, it is the launch of our new exhibition with Portsmouth University’s CCI Faculty.  This evening we will be opening up Sticks in Fareham to a preview of CFA: Work in Progress. 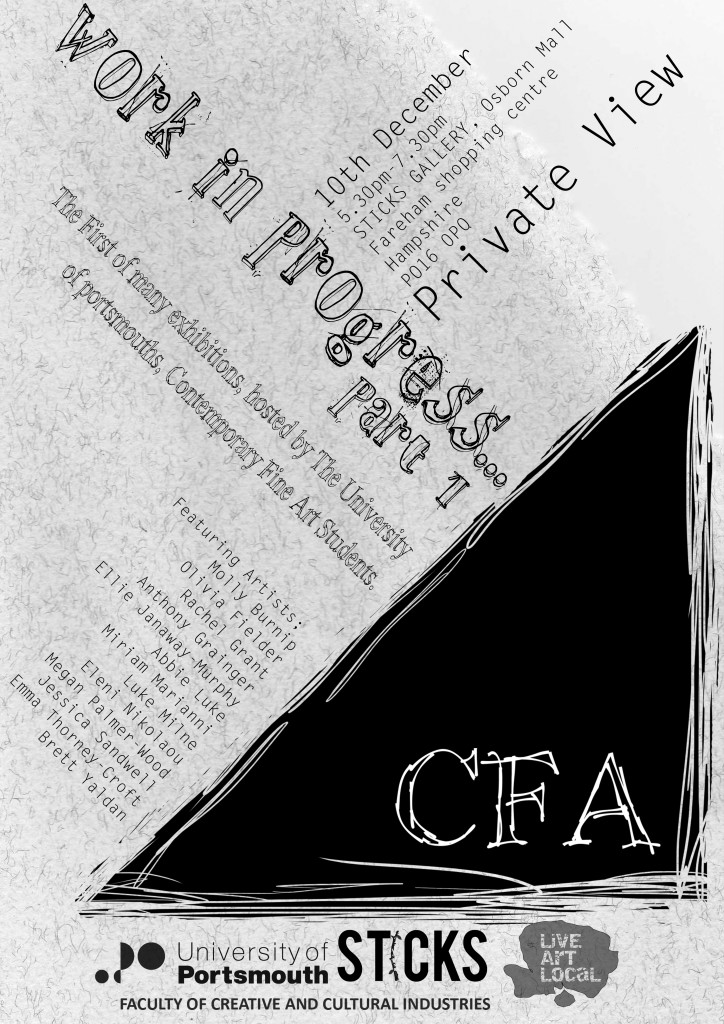 This new show offers a chance for members of the public to see what goes on behind the creation of a piece of art.  It enables us to see the process of making art, and as this is the first in a series of exhibition detailing these emerging artists and their move into being artists out on their own, the progress they make on their work throughout their final year of study, culminating in their degree show to be held at Portsmouth University and in London next year.

There will also be free food and drink and if we can make them in time lovely homemade mince pies and mulled wine to get you in the festive spirit!

Don’t know where sticks is, don’t worry, you can find us in the Fareham Shopping Centre at Unit 79a just inside opposite Millets

Can’t make the preview don’t worry we are open every Thursday – Saturday 10:30 am – 3pm

All are welcome to join us this Thursday 10th December as we launch the newest exhibition taking place in Sticks Gallery.

From 5:30-7:30pm join us for the private view of Work in Progress a new show featuring the work of Contemporary Fine Art students from Portsmouth University’s Creative and Cultural Industries Faculty. 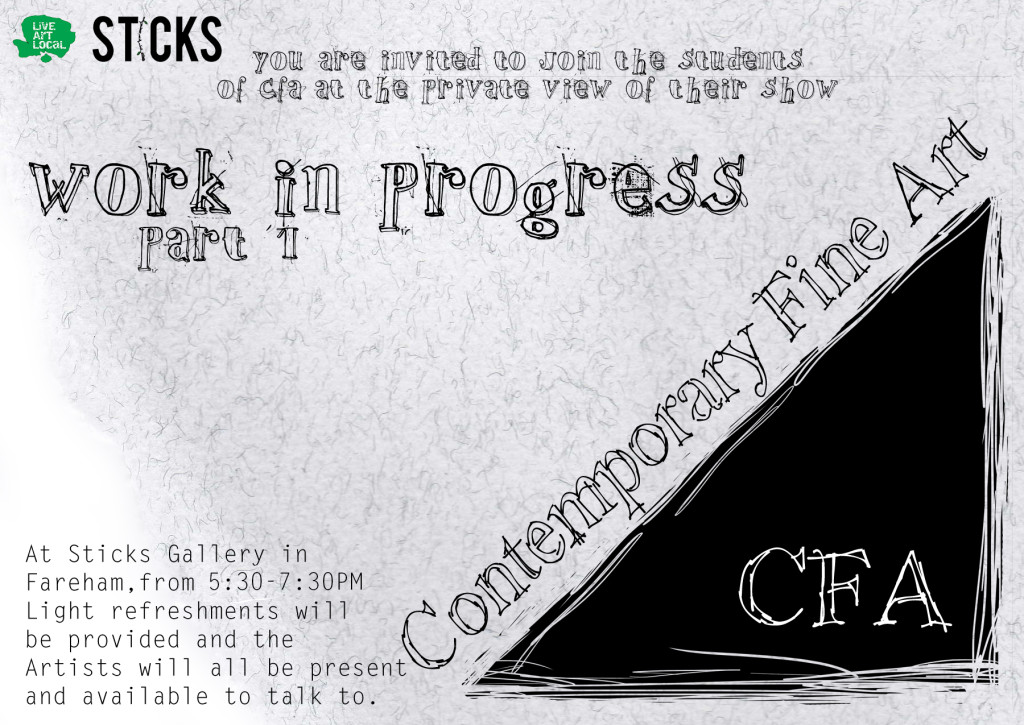 Curated and installed by students from the University this is a first collaboration between ourselves and the University of Portsmouth and is aimed at showcasing great work by emerging artists and giving them a chance to gain valuable experience in many aspects of putting on an exhibition.

There will be food and wine and fantastic work so do join us if you can!

MA Fine Art student and Live Art Local CIC artist, Ailsa Brimms (www.peppermintsea.com) received a commission to create a series of work based around Portsmouth and the people who live and work there in September for  the Porsmouth Cultural Trust at Portsmouth Guildhall.

The show, entitled “Footsteps to the Square” is now up and the opening takes place this Monday 23rd November at Portsmouth Guildhall, alongside the opening of a very special exhibition, Logomania (Christmas Tree) featuring the work of distinguished Chinese Artist, Cheng Henfeng www.chenhangfeng.com.

The preview for both pieces is this coming Monday 23rd December at Portsmout Guildhall, with food and drink available.  The launch runs from 6pm-8pm.

That biennial exploration of what emerging artists are creating now is upon us and the EMERGENCY shortlist has been announced, with one  or two familiar faces if you’ve attended the Platform exhibition at Aspex in recent years.

Out of nearly 400 submissions a final 10 were selected these are:

The exhibition runs from 28th November 2015 until 11th January 2016, with a PREVIEW on Friday 27 November, where all are invited to attend.

To find out more about Aspex, it’s opening times and how to get there please visit http://aspex.org.uk

This is Christina’s first solo show since she graduated in 2014 with a 1st in Photography.

Explores an ambiguous common ground of the everyday. Utterly influenced by her surroundings during a trip to several countries in Europe, colour and composition become subject matter.

The camera becomes a tool to engage with the immediate. The experience in taking the picture being most important, the work relates to direct perception; the subtle strangeness in the familiar.

All pieces are available to buy via our “buy art” page.  The exhibition runs until the 7th November

DATE FOR YOUR DIARY:

So September will soon be over and we’ll be way into Autumn with October’s arrival.   Which is good news in many ways as that means it’s time for Created in Portsmouth Art Trail, that annual celebration of the finest arts in Portsmouth.

Created in Portsmouth is an Open studios Style Art Trail based in Portsmouth and running from 16-18th October generally between 10am and 5pm although times do vary between venues. Trail guides will be available from the beginning of October.

This takes place throughout the island of Portsmouth, currently mainly in the south but the brilliant team behind it are keen to make it even bigger!

It is FREE to visit these great exhibitions and studio spaces

To find out more visit http://www.createdinportsmouth.co.uk

Today I had the pleasure of visiting the provoking the feeling exhibition at University of Portsmouth’s Eldon Building.

This is the final show of Katerina Kazantzis’ MA Fine Art and it is well worth a visit.  Upon arrival you are led through a warren of small corridors by a woman dressed as a rabbit and asked to interact with an array of pieces.

The first stop is a wall of odd shoes (in more ways than one).  Here you are asked to try on the shoes and then keep them on as you walk around the exhibit.  At other times you are asked to try on invisile clothing; eat magic beans and even a film all about religious ceremonies and the magic that is invoked in many of these traditional ceremonies in the same way, the fairytales you have just inhabited invoke the idea of magic and mystery to tell a story.  The final piece is entitled “Believe” and asks you to believe in something more than yourself, its slow pulsating light acting as a type of hypnotic call to action.

My favourite part of the exhibition is definitely the mirror and projection wall in which you are literally in the middle of a piece and stood along from other versions of yourself.

This exhibition is upstairs in the Eldon building’s Fine Art Studio and runs from 6-8pm for the next two nights and from 4:30pm on Friday 18th September.

This is most definitely a family friendly exhibition. 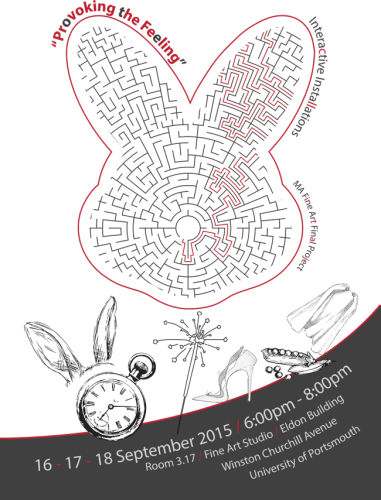 Human is the first exhibition held at Sticks since we discovered our license was going to be extended.  We are seeking work from artists in any medium, (including 2d, 3d, film and sound) in response to this theme.

Our choice for the theme of this next exhibition is inspired by the ongoing refugee crisis currently ongoing in Europe and the way it has divided public opinion; where people have become headlines rather than human beings and life has become cheap.

Work does not need to relate directly to the refugee crisis and can instead be a way of questioning what it means to be human: who are we, why are we here, what is humanity?  Anything that relates to the word “human”, be as outside the box as you like!

All artists can enter this call out but we ask for a contribution of £3:50 from non members.  As with the majority of our exhibitions, Live Art Local members can enter for free.

If you are not already a Live Art Local member, you can join by visiting  http://liveartlocal.co.uk/get_your_art_seen/

Non-Members can enter by donating £3:50 below.  Upon completion of payment you will be forwarded to a page with the form and image upload, please complete these and send at least one image of your work.

Member of Live Art Local can enter by logging in and filling out the form below:

Submissions are open until Saturday 3rd October.  Selected artists will be notified by Monday 5th October and work will be received until Sunday 11th October.  There will be a private view between 5:30 – 7:30pm on Thursday 15h October with new opening hours commencing on Saturday 17th October.

Advance Notice: Eyes For Blowing Up Bridges: Joining the dots from the Situationist International to Malcolm McLaren 26 September – 14 November 2015

We are very excited to announce this new exhibition from the renowned John Hansard Gallery in Southampton.

From Situationism to Beat to Punk, Eyes For Blowing Up Bridges unites a group of remarkable radical artists, poets, writers and activists who initiated, perpetrated and influenced a range of seminal post-war alternative movements.

Presenting rarely exhibited material – including cut-ups, paintings, film, video and sound, as well as self-published books, pamphlets, anarchist propaganda, punk ephemera and graphics – the exhibition examines the creative interplay between William Burroughs, Guy Debord, Asger Jorn, Alexander Trocchi and King Mob, and their collective influence on Malcolm McLaren in his endeavours to disrupt the cultural and social status quo from the 1960s to his premature death in 2010. 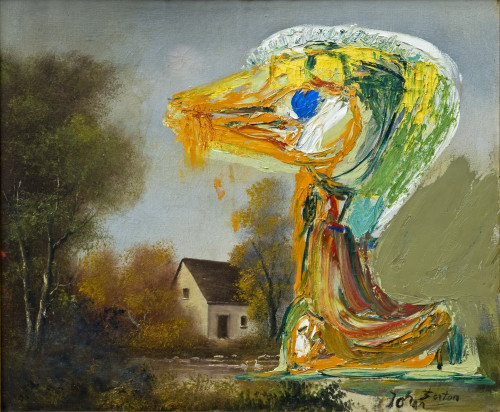 Malcolm McLaren co-opted the intellectual vigour of this powerful and difficult group of individuals to make insurrectionary statements from his days as a Situationist art student in the 1960s, to the end of his life in groundbreaking artistic forays expressed through pop culture (fashion, music, environment, performance, film). Having repudiated painting as a bourgeois form of expression like Jorn before him, McLaren’s lifelong work was inspired by such Situationist techniques as détournement (the juxtaposition of pre-existing elements), Burroughs’ ‘cut-ups’, and Debord’s emphasis on the staging of situations “that bring a revolutionary reordering of life, politics and art”.

Eyes For Blowing Up Bridges will present the so-called “defiguration” paintings exhibited by Jorn in the early 1960s, alongside the detourned comic strips of the Situationist International’s literature and Debord’s cinematic masterpiece, The Society Of The Spectacle. McLaren resurrected slogans associated with radical group King Mob, and their commentary on the banalisation of everyday life by the consumer society in the late 1960s. He also lifted text from the porn novels Alexander Trocchi wrote for the Olympia Press in the preceding decade. Original volumes of the revolutionary group’s King Mob Echo will be on display at the exhibition, which will also highlight the links between Trocchi’s book Helen And Desire and McLaren’s t-shirts design entitled ‘I Groaned With Pain’

We at Live Art Local are very excited about this exhibition and cannot wait to visit.  If you want to find out more then visit www.hansardgallery.org.uk

This week we are spoilt with artistic offerings. from established artists to those newly emerging there is something for everyone to enjoy.  So have a look below and see what’s coming up!

WHO: Jan Griffiths and others

WHAT: Art in The Garden

OTHER THINGS OF NOTE: Free Car Parking/ Work for Sale/ Cash only 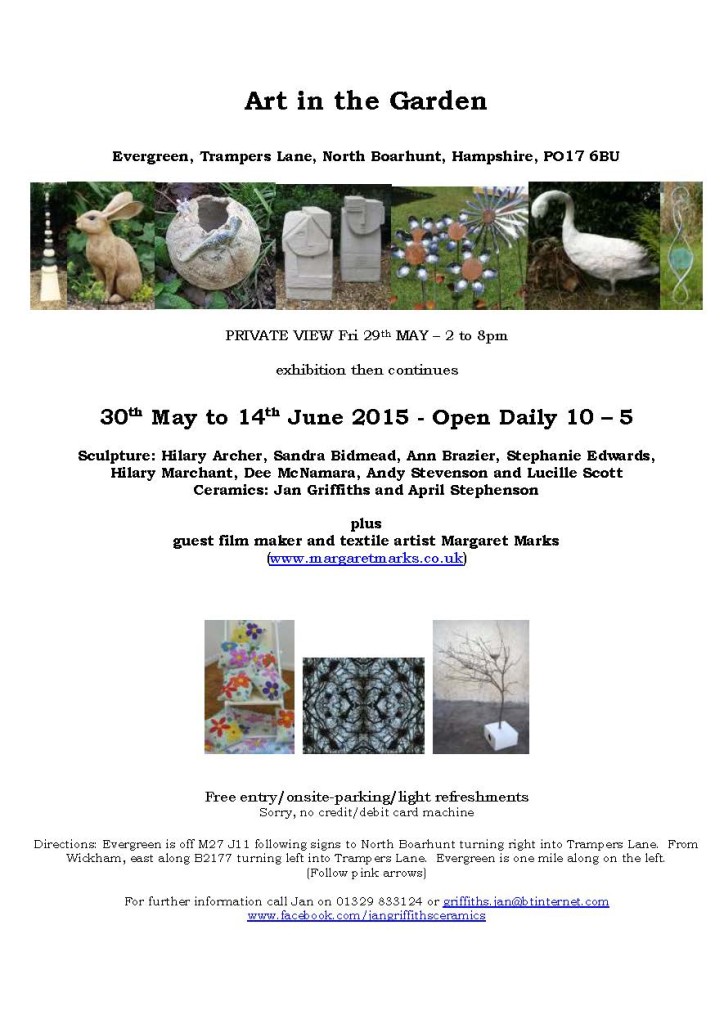 Whether you attend it before of after there is another private view happening tomorrow and you can find its details below:

OTHER THINGS OF NOTE: Live Music and performance

WHEN: We have no other details about this event but will try and get them confirmed on Friday

OTHER THINGS OF NOTE: Please check first as we cannot verify the details we have been given

Want to keep up to date with our latest projects and happenings?